It’s been a while since the last Life Around Here update and a lot has been happening chez tMatM.

I mean, since that last January update we’ve added an extra person to the house but I’m also pretty sure I’ve mentioned him a few times since then so he’s not exactly news… 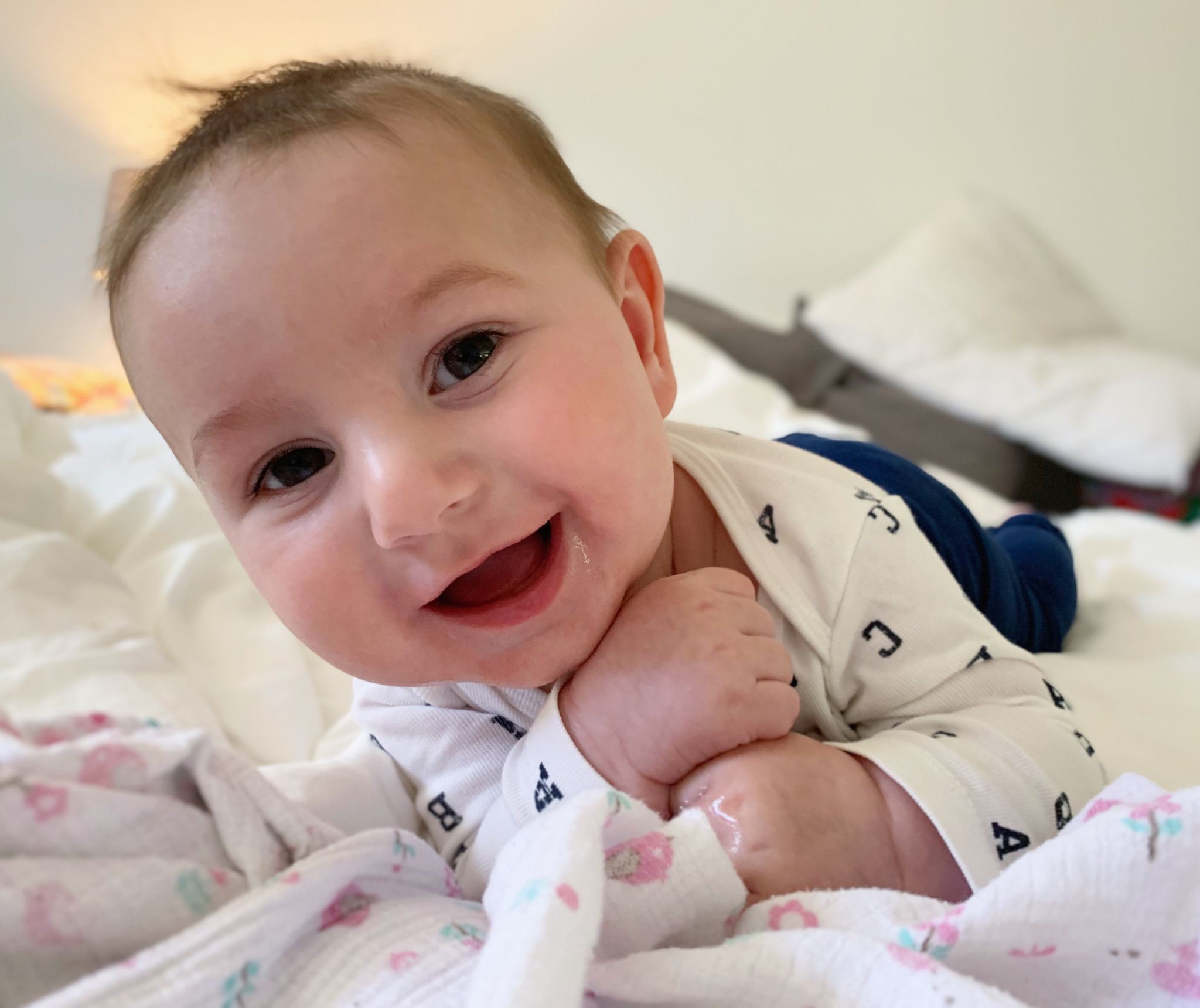 It’s been a big summer. Jacob (9) has taken to the seas and after a couple of weeks intro to sailing course in July he’s back for another week of sailing at the moment. He’s really enjoying the sense of adventure; a perfect pastime for my once-fearless-toddler who used to be, as another mum put it so succinctly, a ‘runner’ – aka, he liked to make a bid for freedom whenever we were in public spaces – such that I was often left hotfooting it across fields to catch up to him. 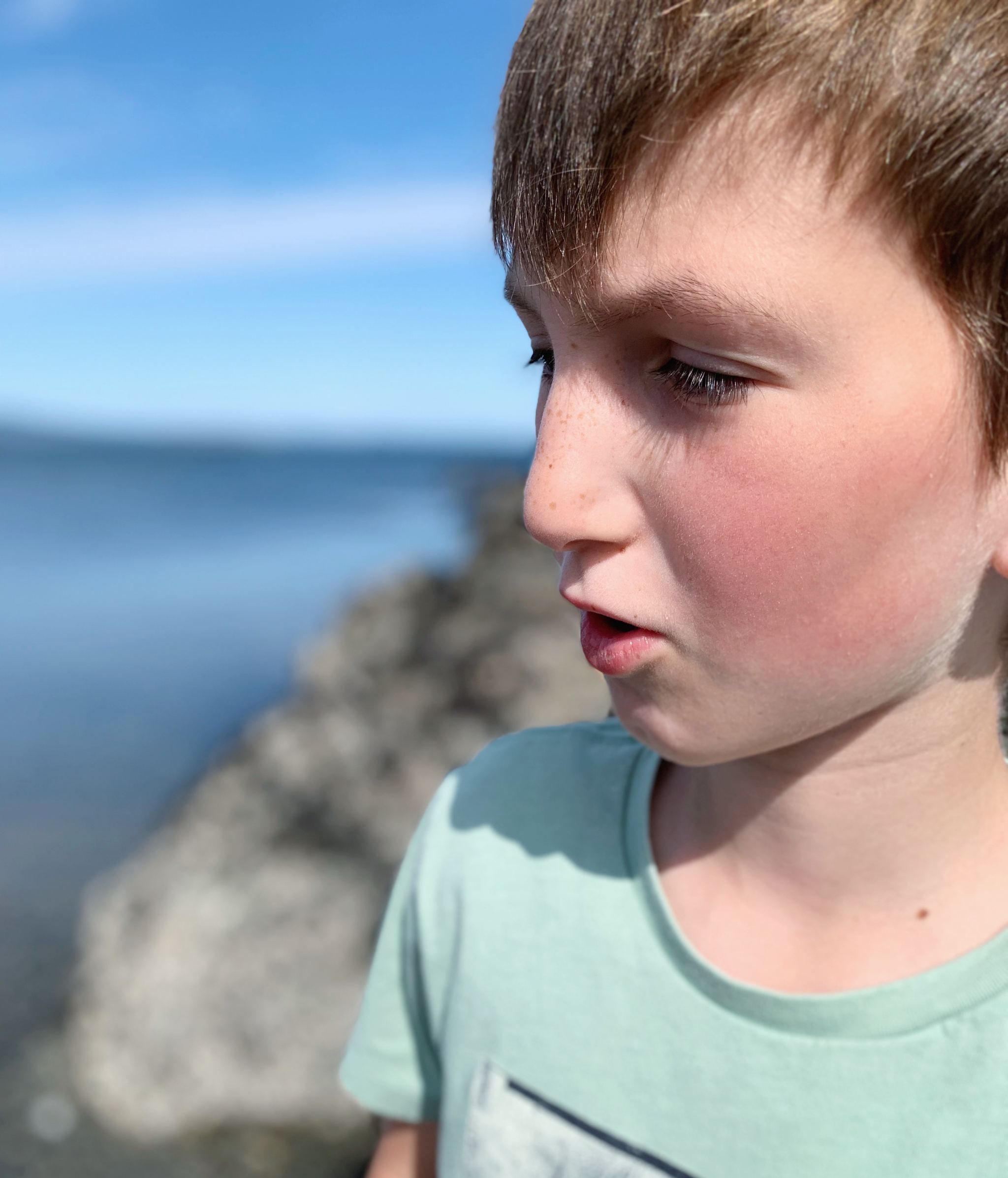 These days his fearlessness involves less running on my part.

And then, after a week of swimming lessons and summer rites-of-passage (for me – I didn’t even know what a Dairy Queen was before we moved here, how un-North-American is that!?) 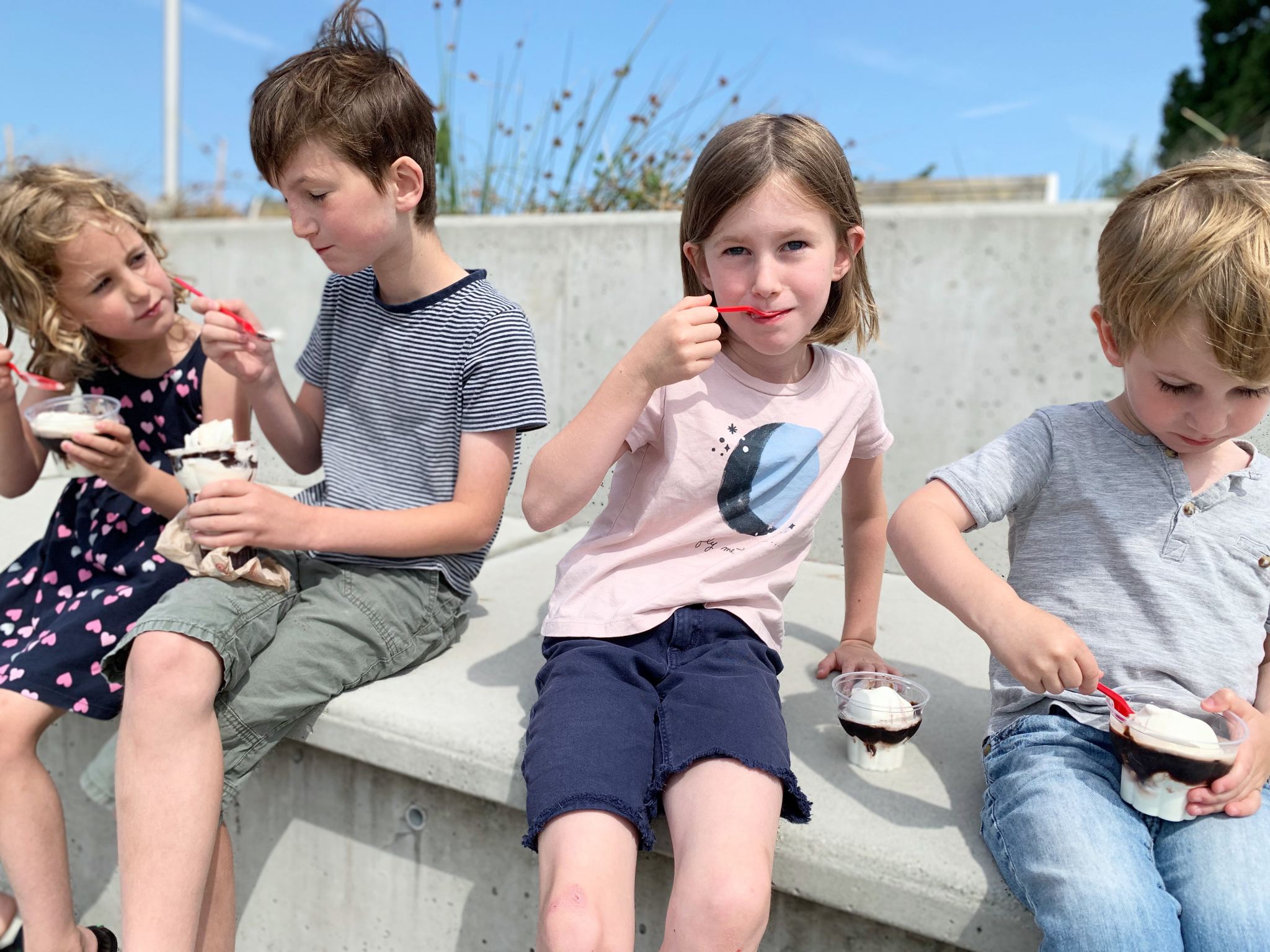 My children; artificially flavoured ice cream, and poured concrete: these are a few (six) of my favourite things

And then, AND THEN, we thought we’d take all five children and our tiny trailer from Vancouver island to the Grand Canyon, via Nevada and Utah, then home via Yosemite, California, Oregon. 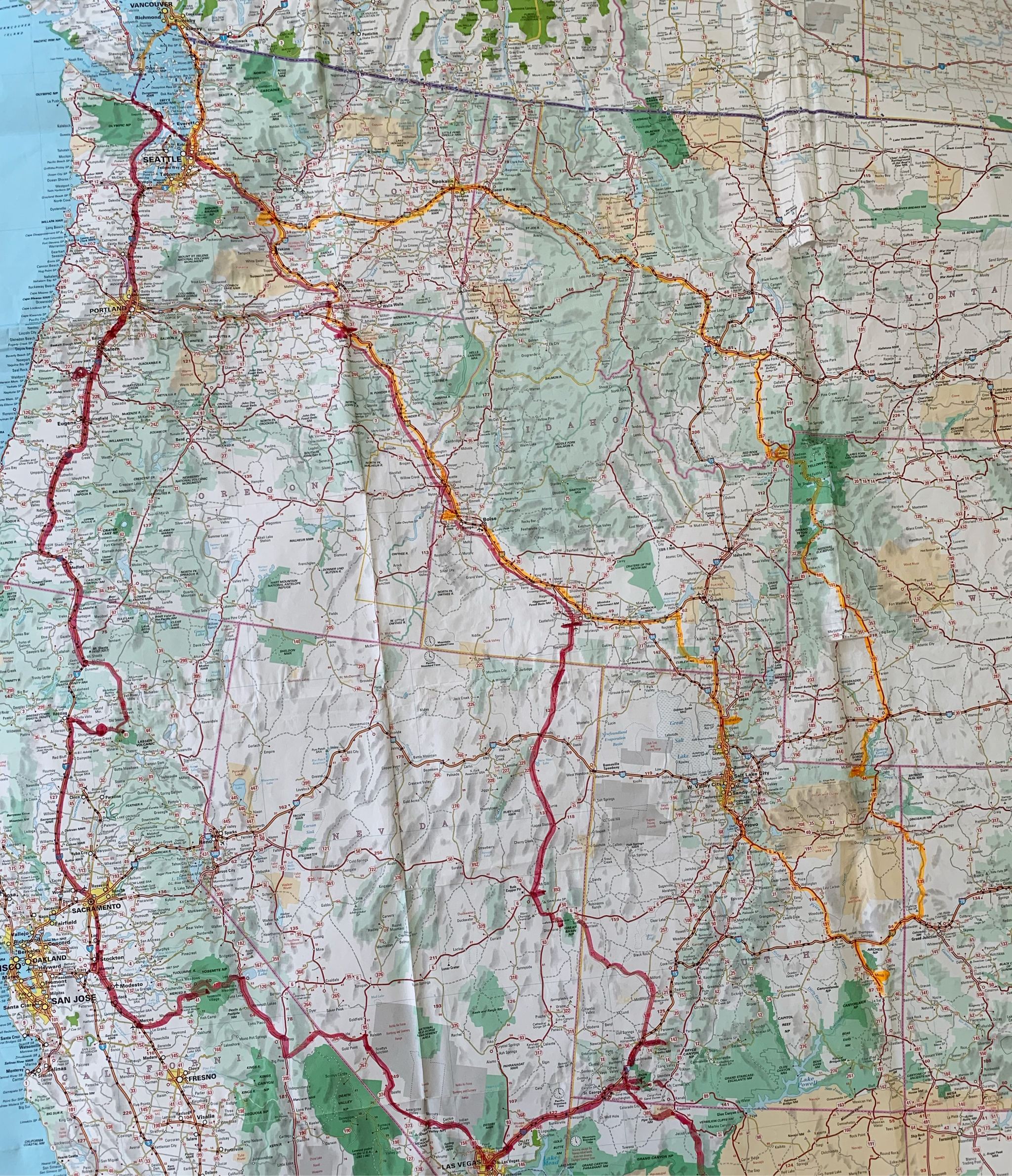 There is probably a more technical way for me to record our route on a blog but in lieu of that, please enjoy a dog-eared map with last year’s route in orange and this year’s route in a dark pink.

Truly an epic journey that was as exhausting as it was enjoyable. The tiny trailer stood up to the two week adventure pretty well. 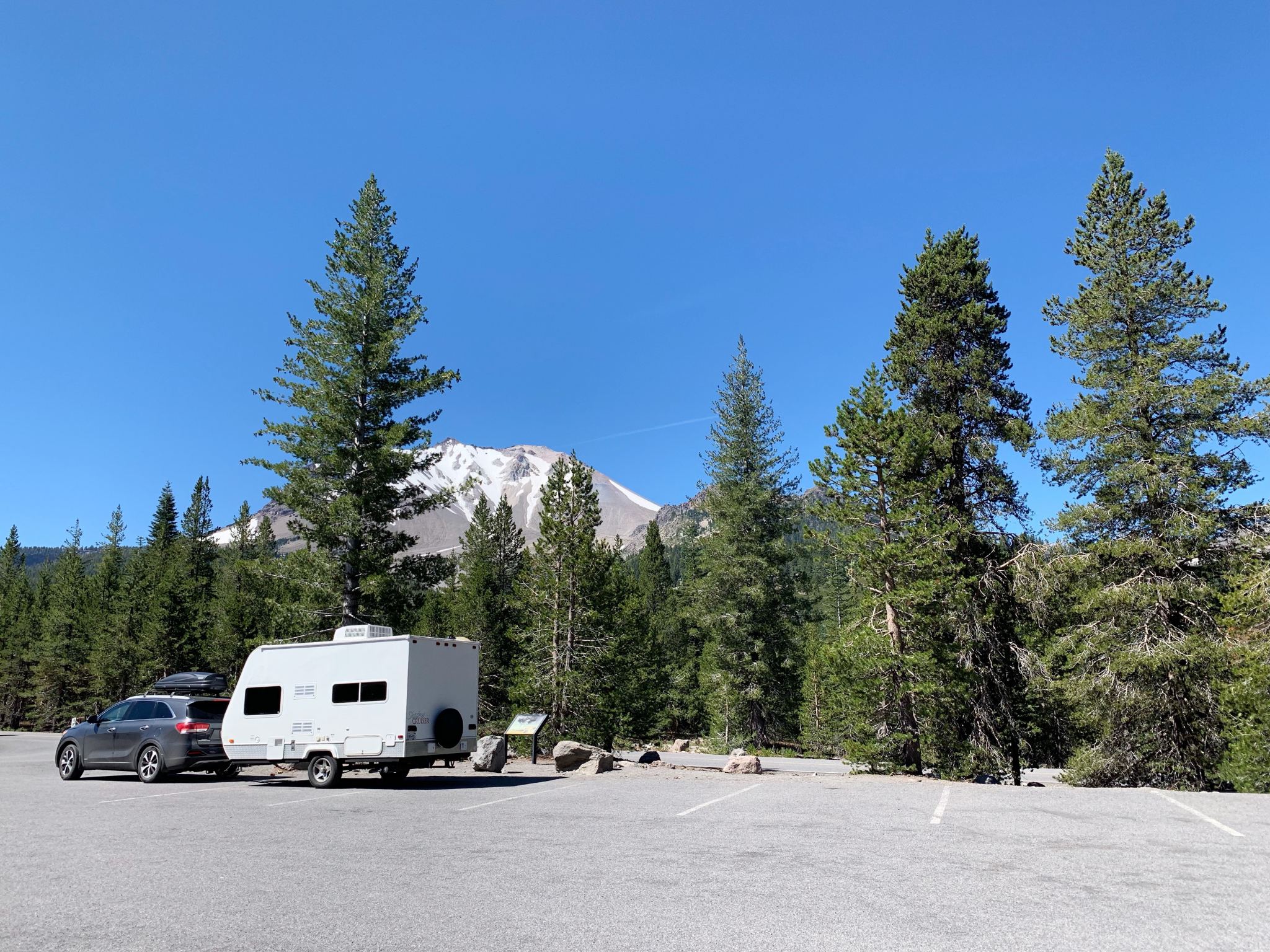 Rewind to the start. 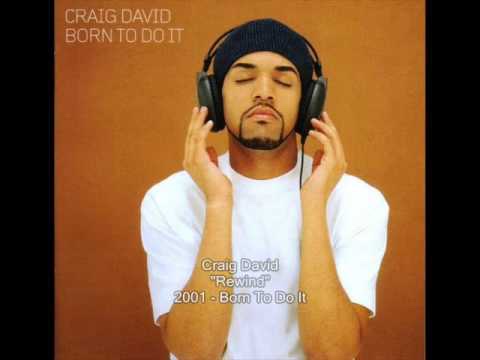 The trip started on the Coho ferry from Victoria to Port Angeles, then a drive to Oregon – 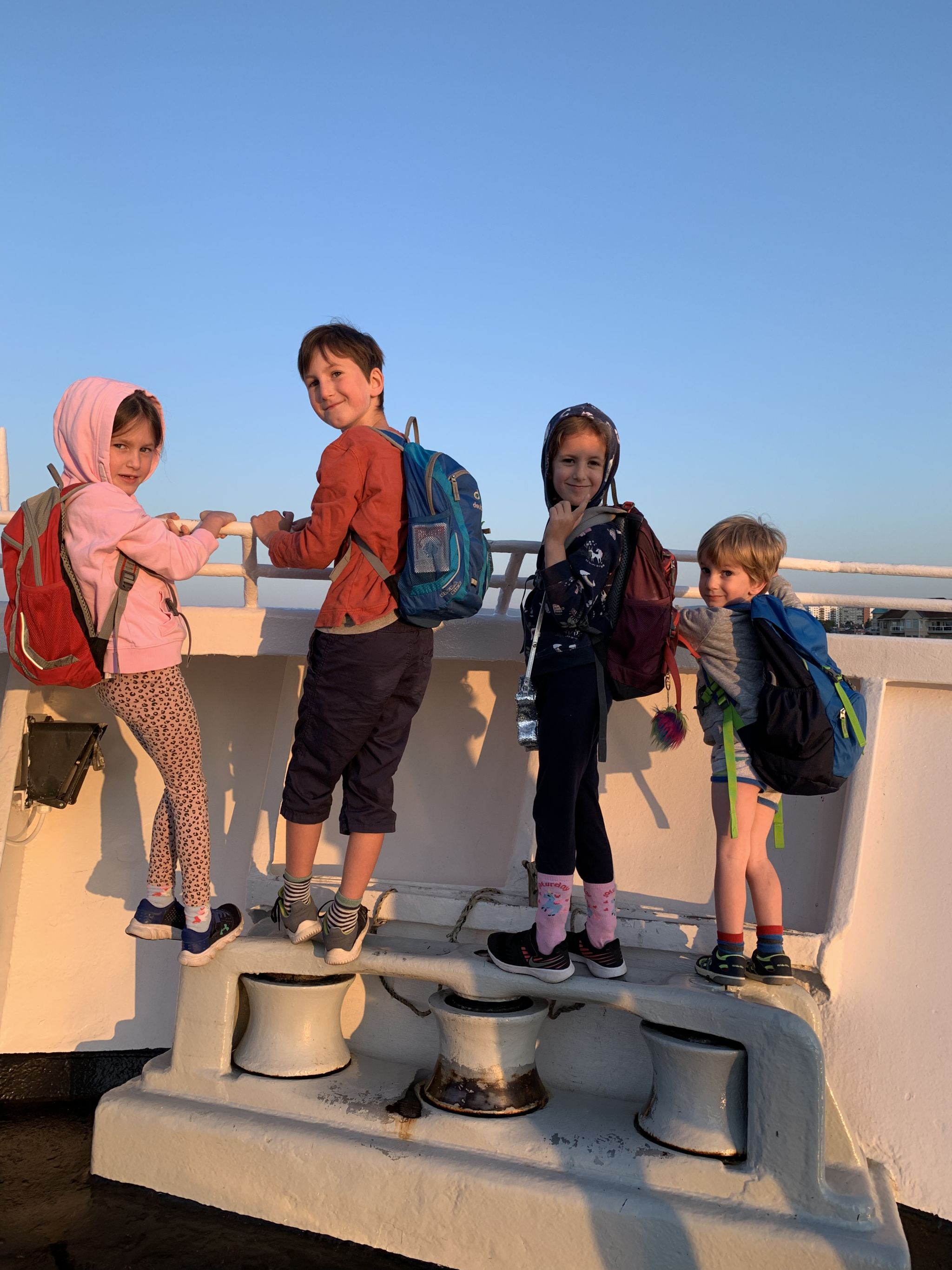 The 6am sunrise ferry from downtown Victoria to Port Angeles: a delight 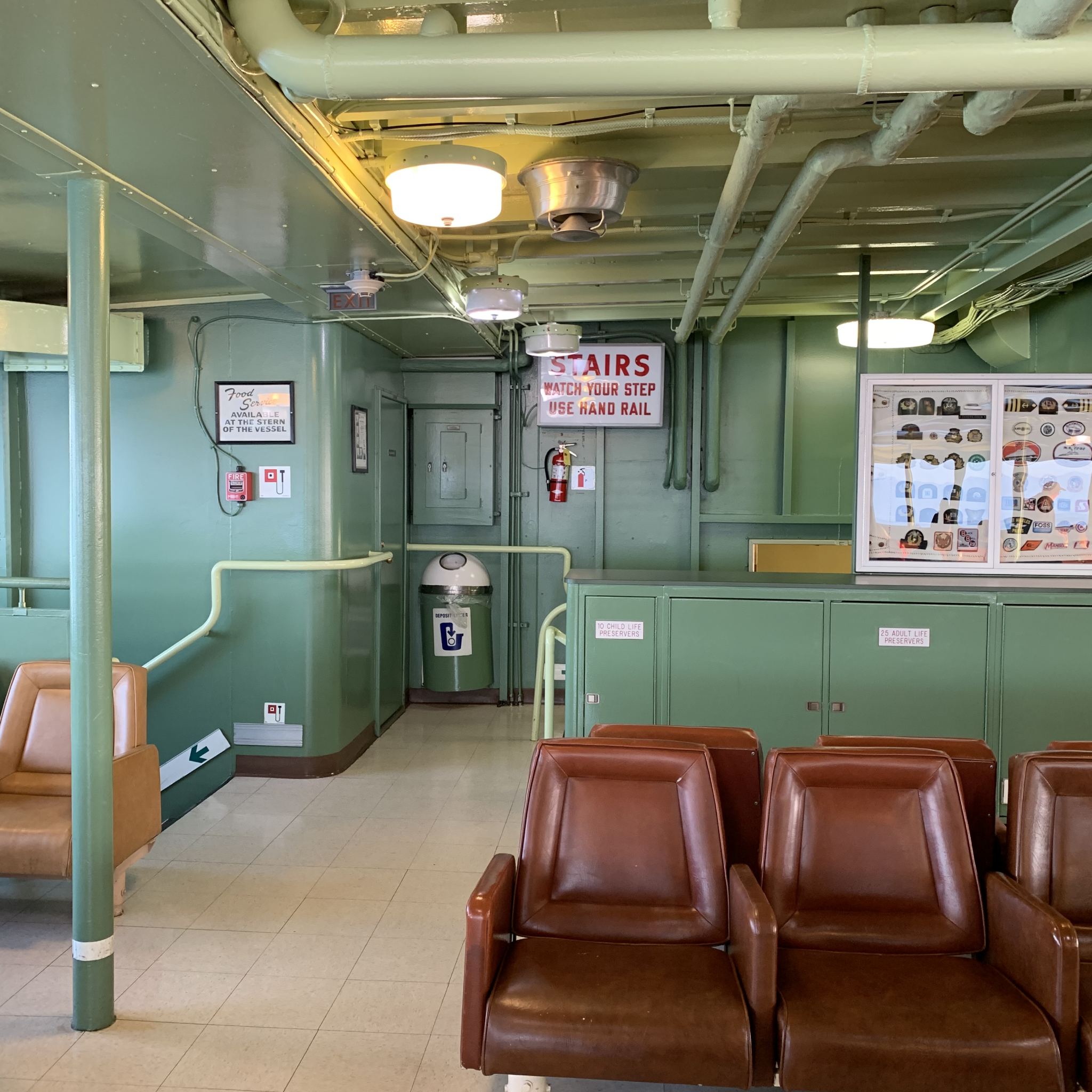 50s ferry interior, also a delight – and much nicer than the brown carpeted ferries from Vancouver-Victoria (sorry bc ferries).

On our first night we camped next to a woman who lived in her trailer, insisted on giving me a tour of her place (a LOT of Danielle Steele novels), presented me with some hand-sewed pot holders, and casually/ominously mentioned that she had moved there five years ago so that she would be able to visit her husband daily, while he was in the local high security prison.

Come back next summer!’ she said, cheerily; ‘I’ll still be here!’ while I pondered what he must have been convicted of for such a long sentence (not parking offences). 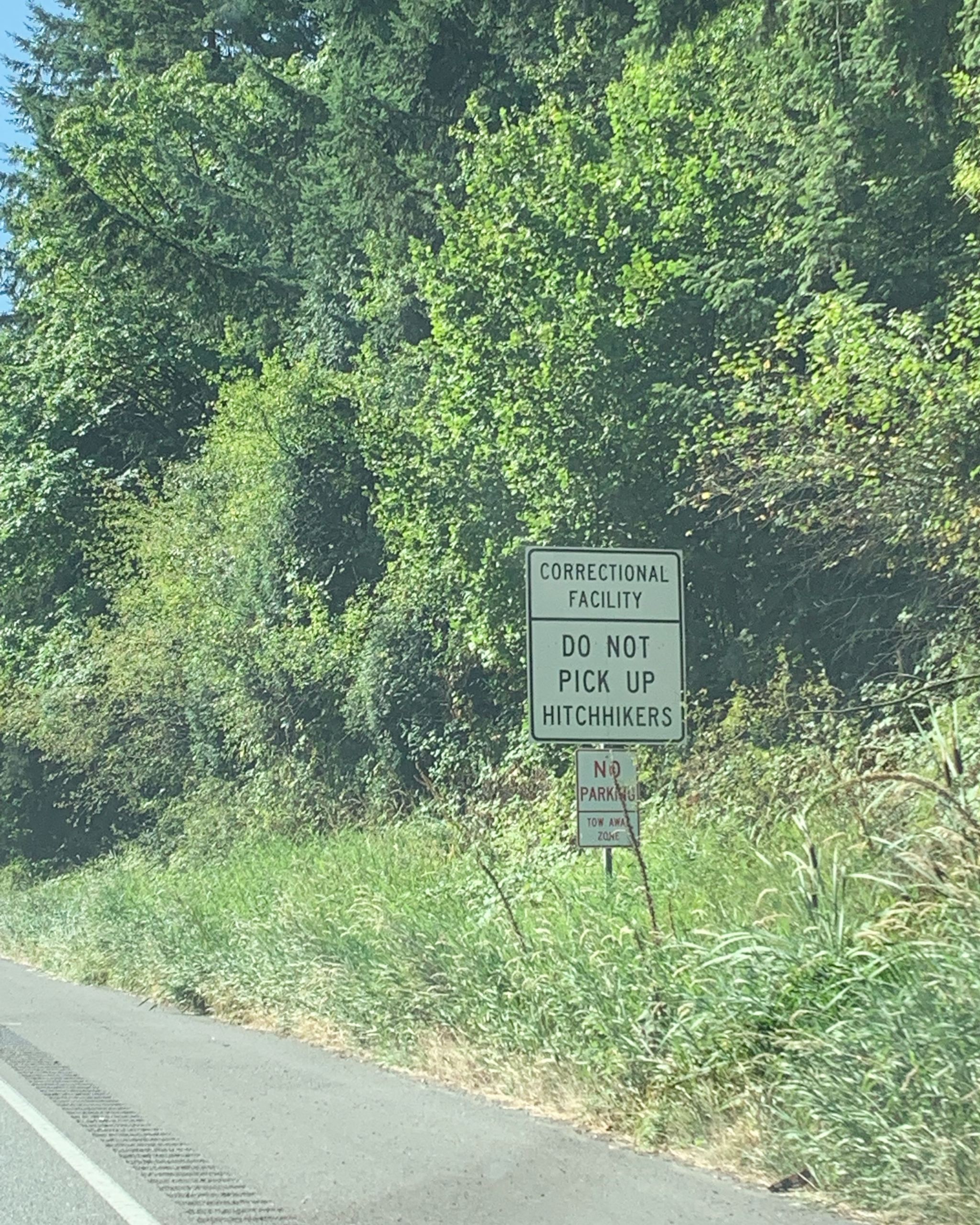 Anyway as we drove out of that particularly salubrious Oregon stopover the next day we saw a number of these road signs so looks like her husband isn’t going to be catching a ride any time soon.

And we won’t be back next summer (sorry Darlene). 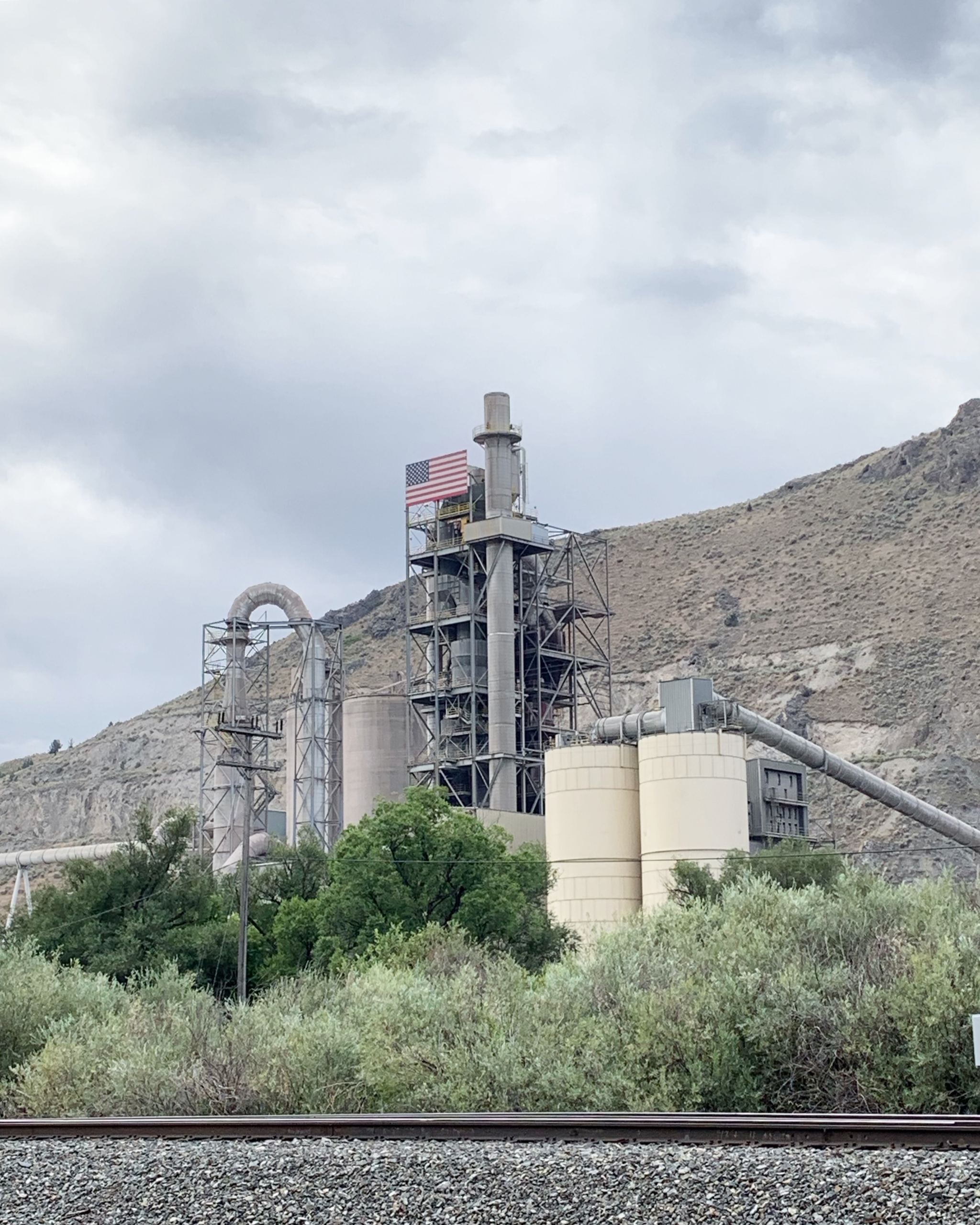 To Nevada, via Idaho. We stopped for lunch just off the highway on an abandoned road to a cement works and had a perfect view of some giant trains hurtling past and even tooting their horn (peeping? I’ve read too many Thomas tank engine stories) to the children, practically spoiling Wilf (3) for the rest of the holiday. 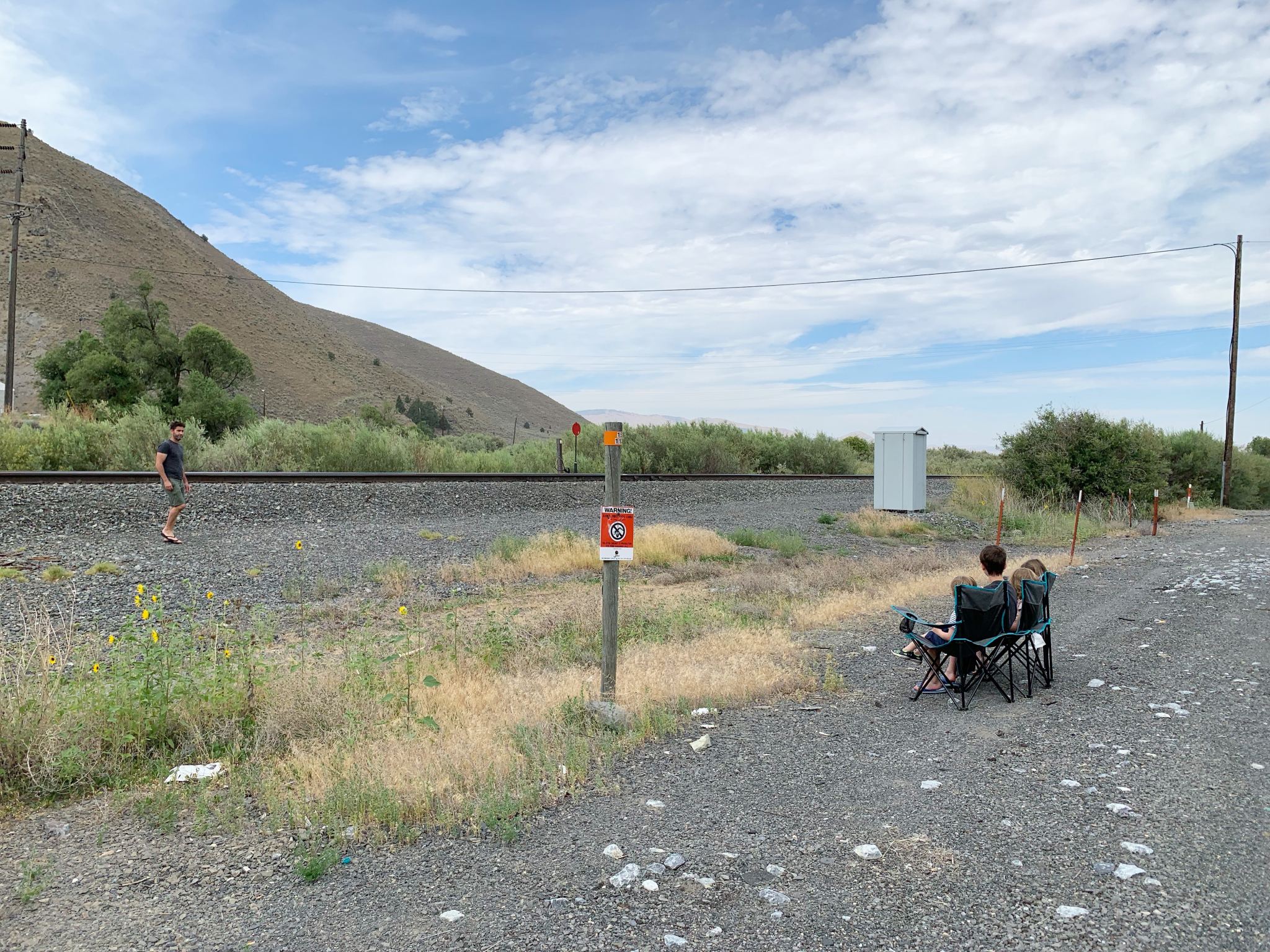 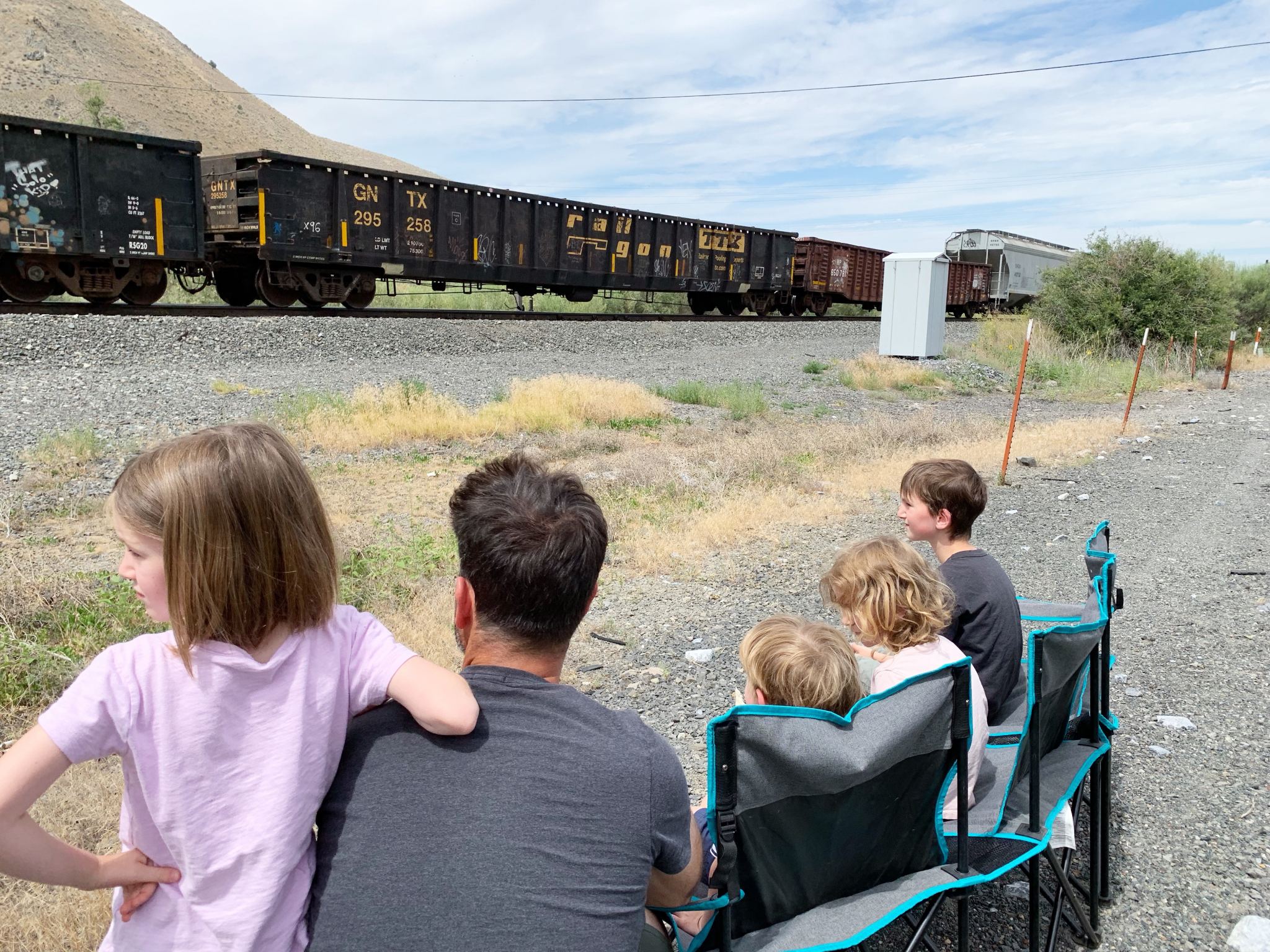 Not pictured: Wilfred’s face – utter joy. In case you were wondering how to entertain a three year old who loves Thomas the tank engine: a cheese salad wrap and camping chairs next to a railway works pretty pretty well.

The real reason for the route through Nevada, other than to ensure we weren’t treading the same path as last year – the real reason was to include a stop in Great Basin national park, which has some pretty impressive caves.

Before that, though, we happened upon another train related pit stop en route – Nevada Northern Rail Museum. 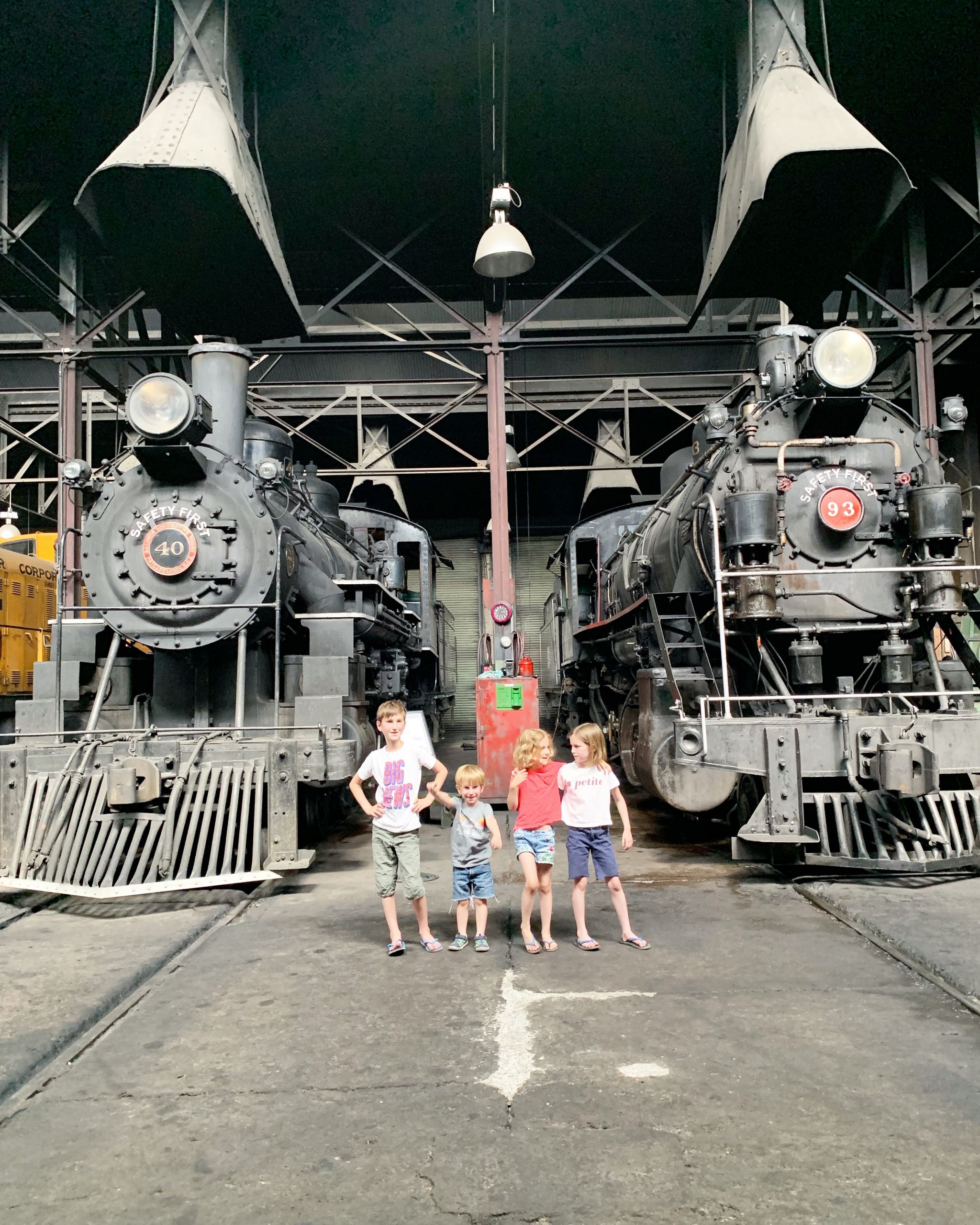 Thomas and friends didn’t look this huge in the books. Also maybe a little less menacing?

A perfectly preserved railway and workshop, Every toddler’s dream; perhaps less dreamy for the safety-conscious mothers amongst us, aware of giant oily pits, rusty sharp metal objects and various heavy machinery that we were able to freely wander around: 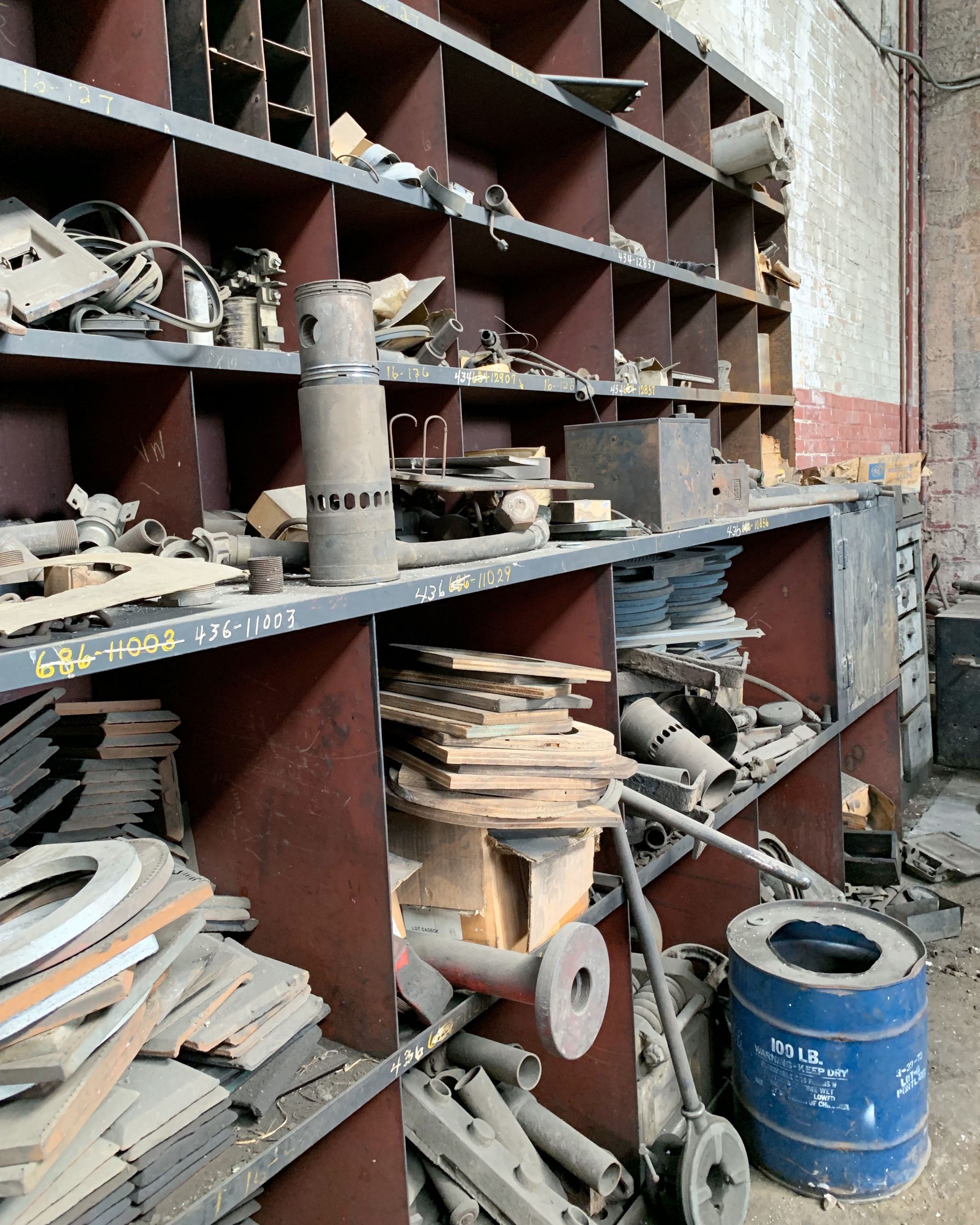 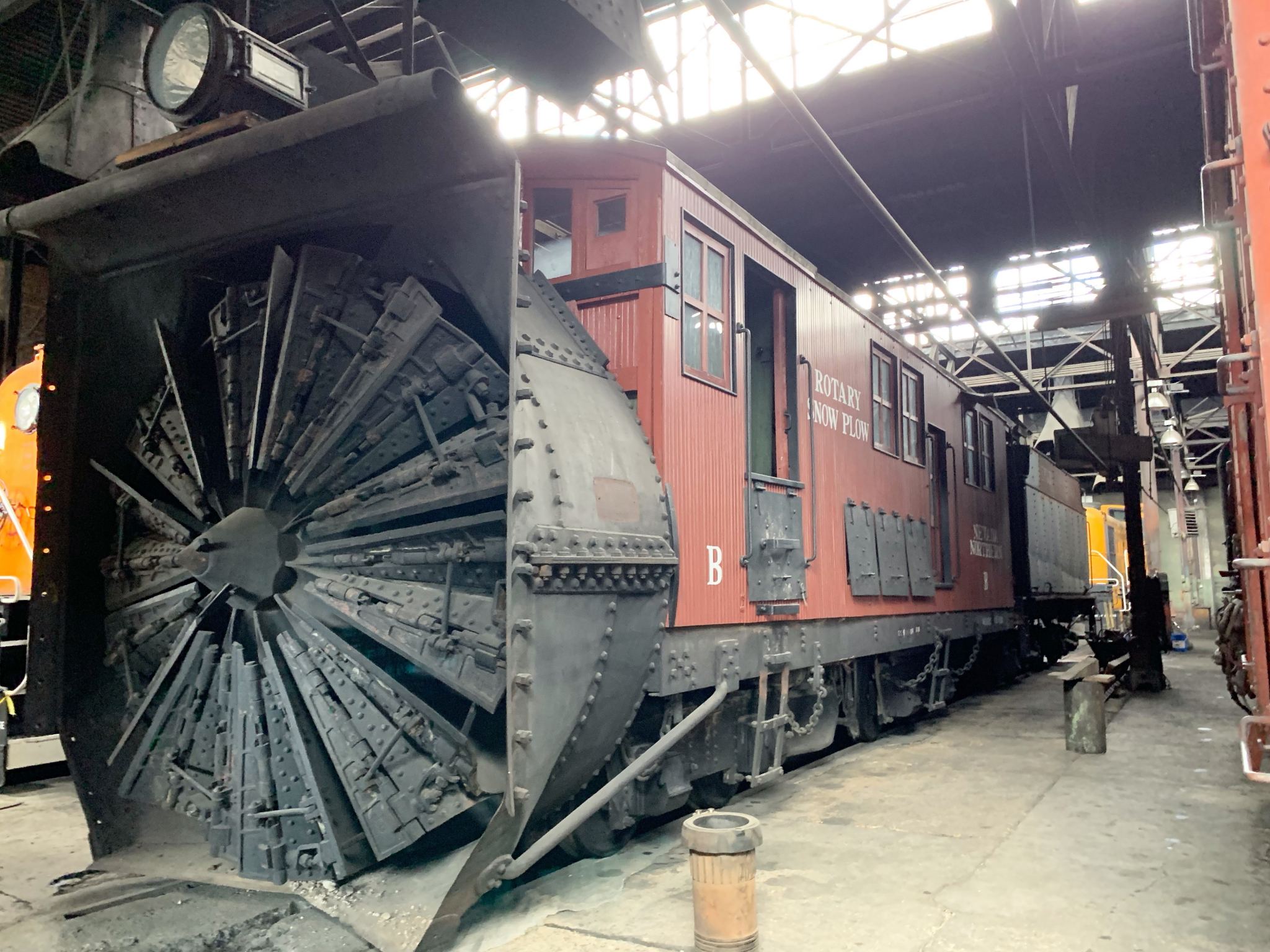 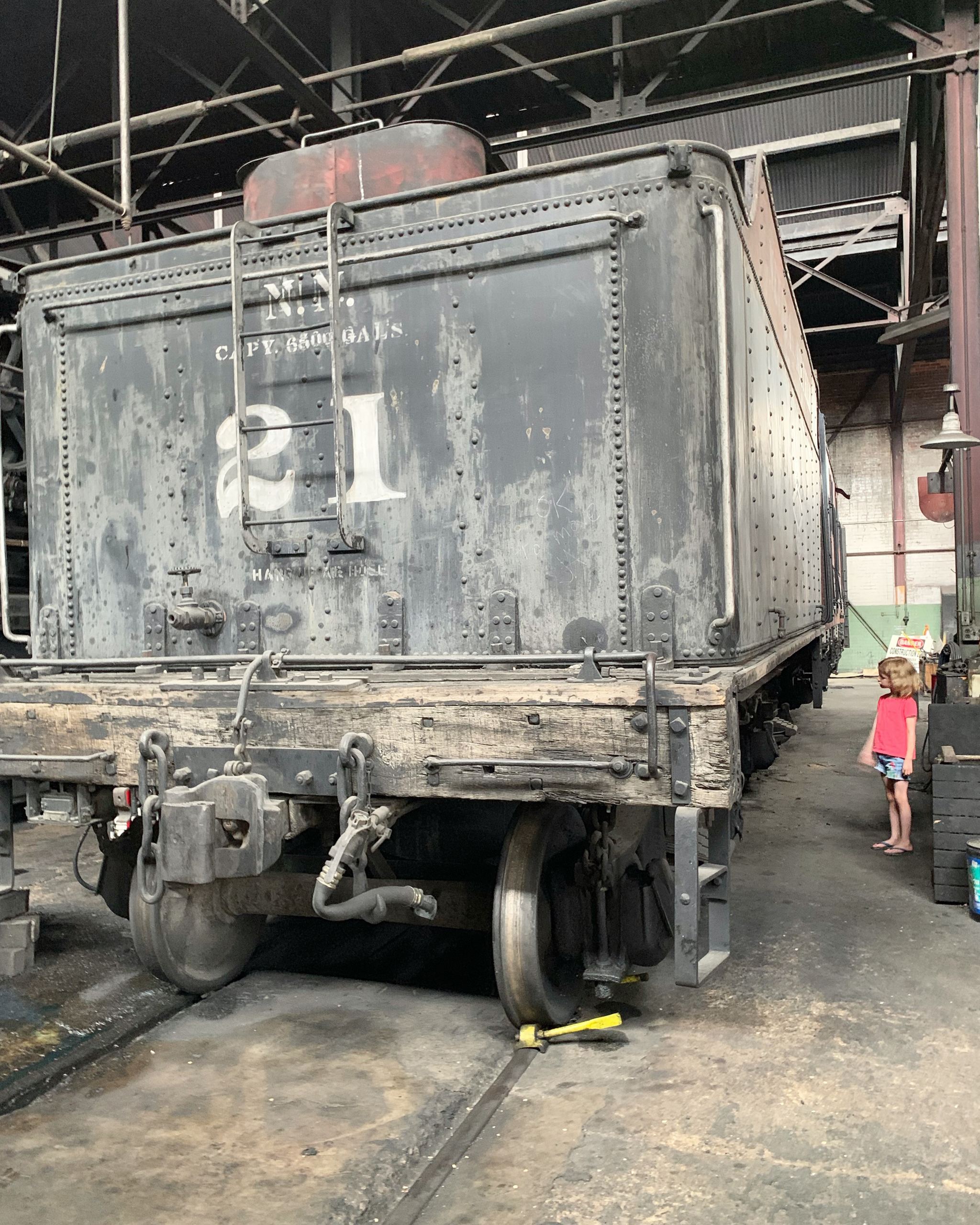 Also quite instagrammable, if I hadn’t been so focused on keeping the children within grabbing distance: 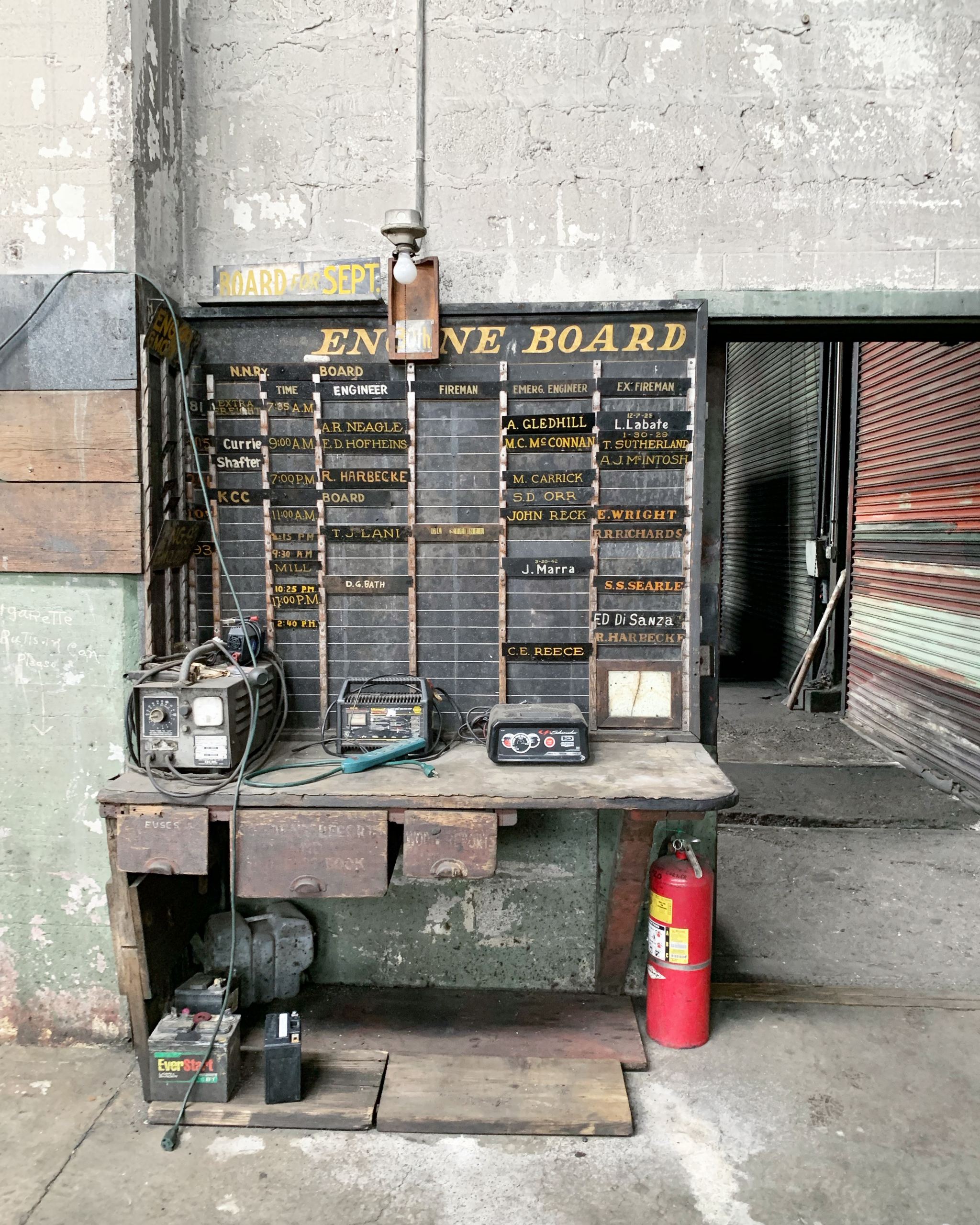 I promise this is the last train-related photo.

The next day we were booked into a 60 minute tour through the Lehman Caves at Great Basin national park.

We briefly considered staying in the (beautiful) national campsite, but the local rattle snakes were a slight drawback. I did, however, spend enough time googling “what to do if a rattle snake bites you?” and “rattle snakes how bad?” and I am now a semi expert on rattle snake encounters, so there’s that.

The caves, though! You can only visit them on a guided tour; the tour guide had a number of hilarious one liners and exceptionally long explanations such that I was briefly concerned about a toddler attention span, but I needn’t have worried. What an experience – the children are still talking about it, although perhaps in part because our tour guide switched the lights off for a full seven minutes and I nearly had a panic attack whilst clutching the girls’ hands and using a forced “reassuring” voice. 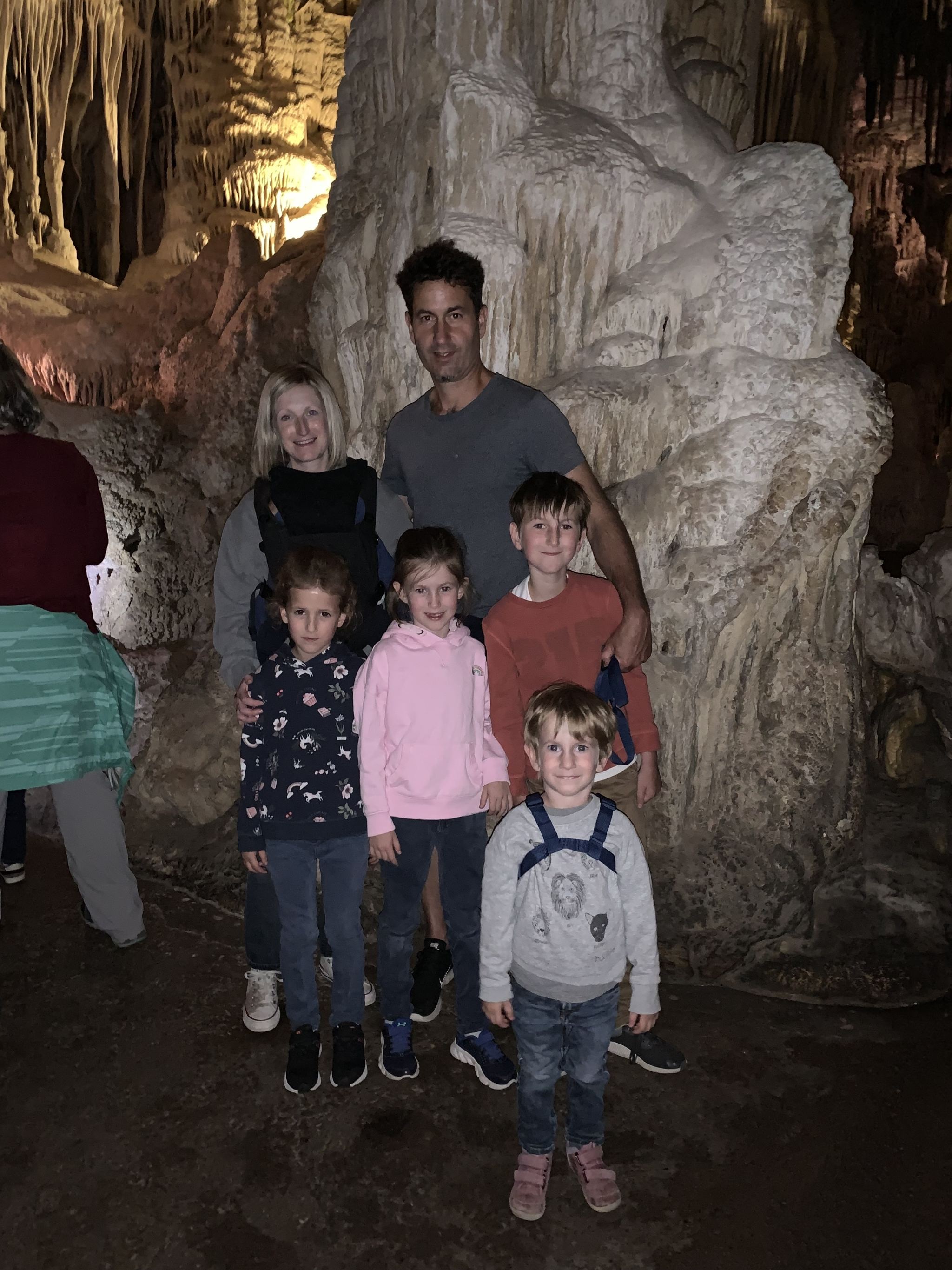 After they switched the lights back on and someone offered to take our photo. Please note; my slightly clammy post-panic sheen, and Wilf’s harness (I was terrified we’d lose him in an elaborate cave network). One for the mantelpiece? 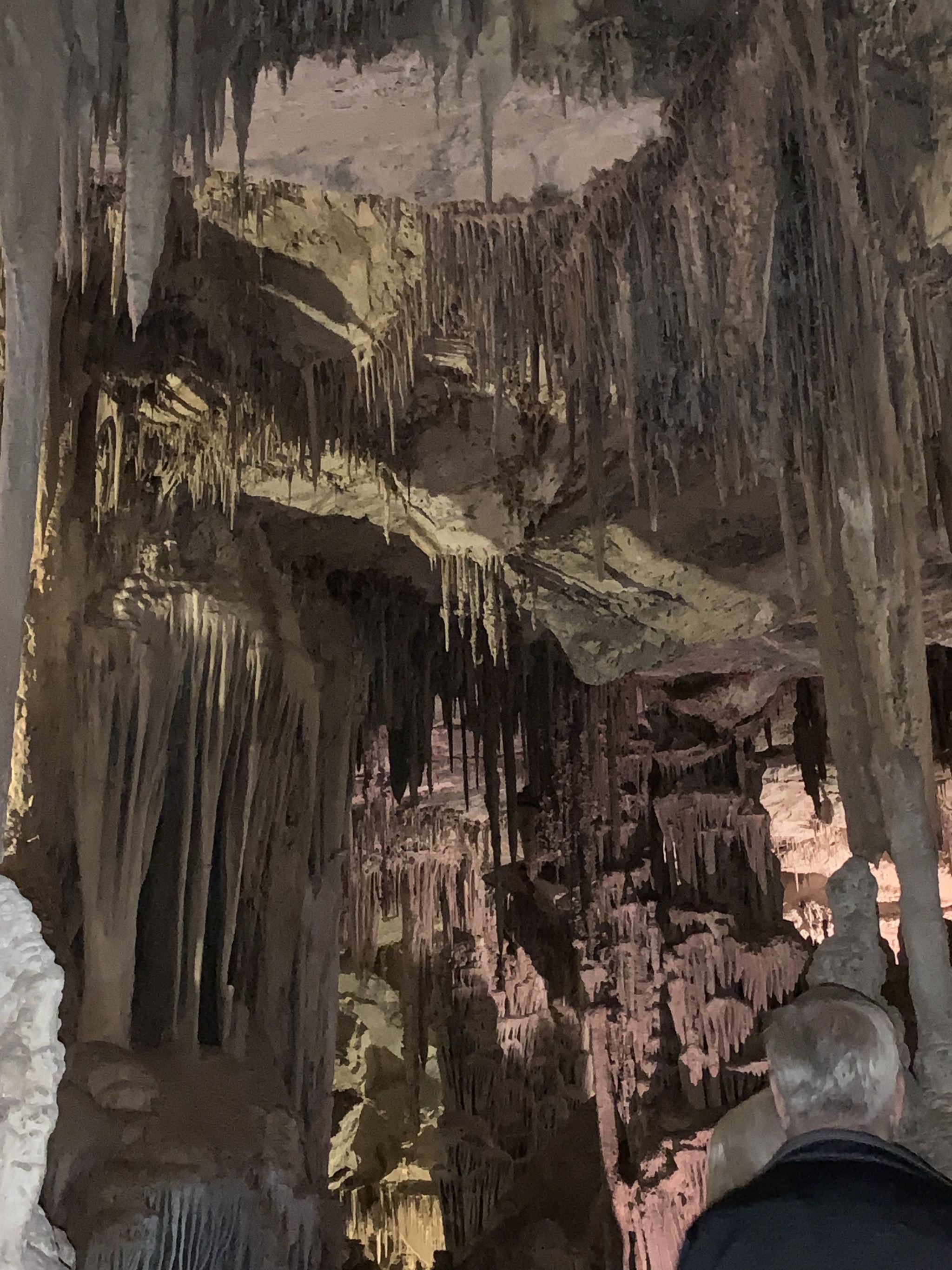 After nixing any idea of camping at the national park we set off for Utah. Nevada roads look a lot like this: 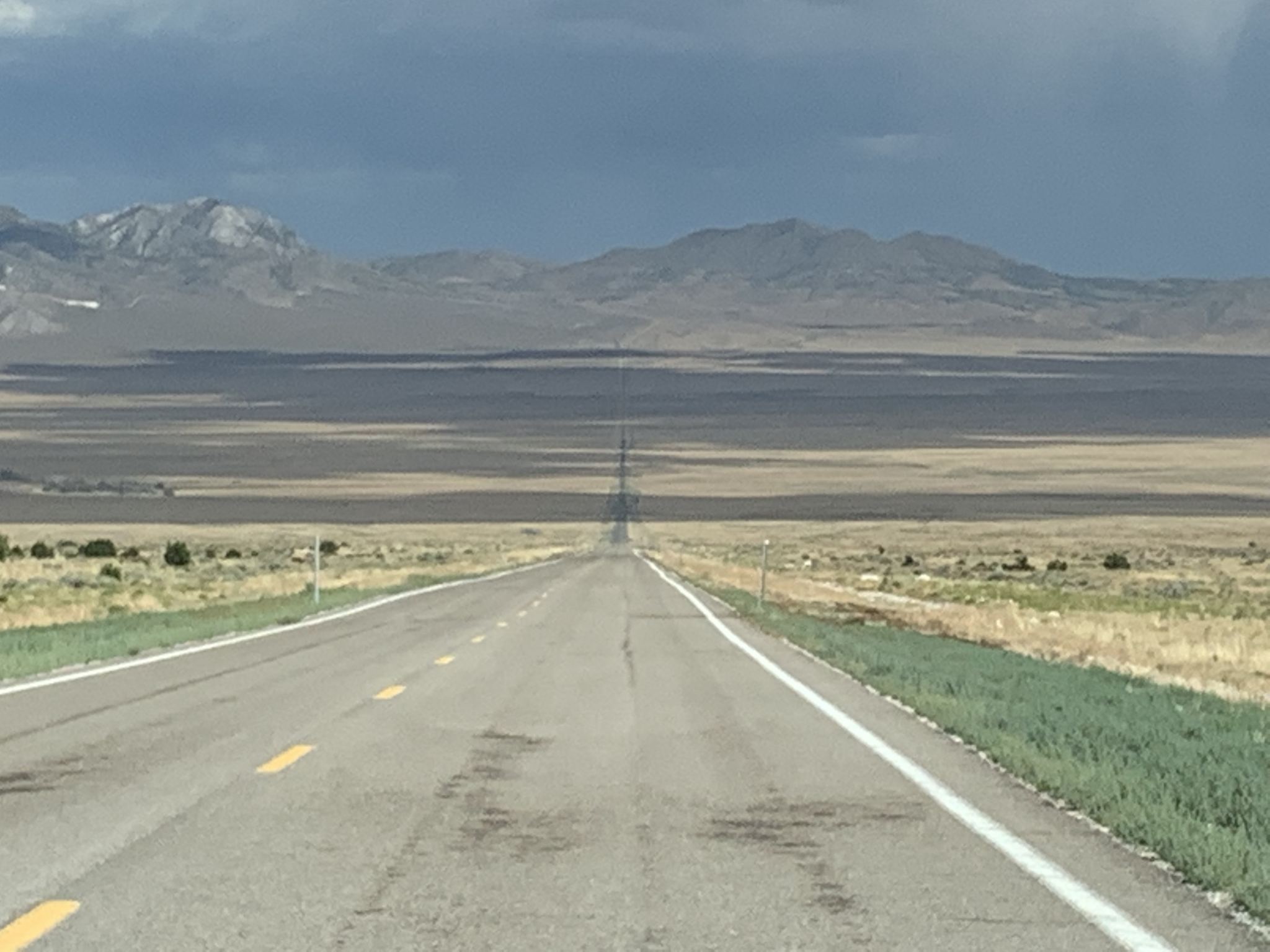 Which is to say, surprisingly beautiful, albeit a little terrifying when travelling with five small children in 39C.

We made it to a fairly unremarkable campsite near Zion, Utah, and the next morning arrived at Kolob canyon. 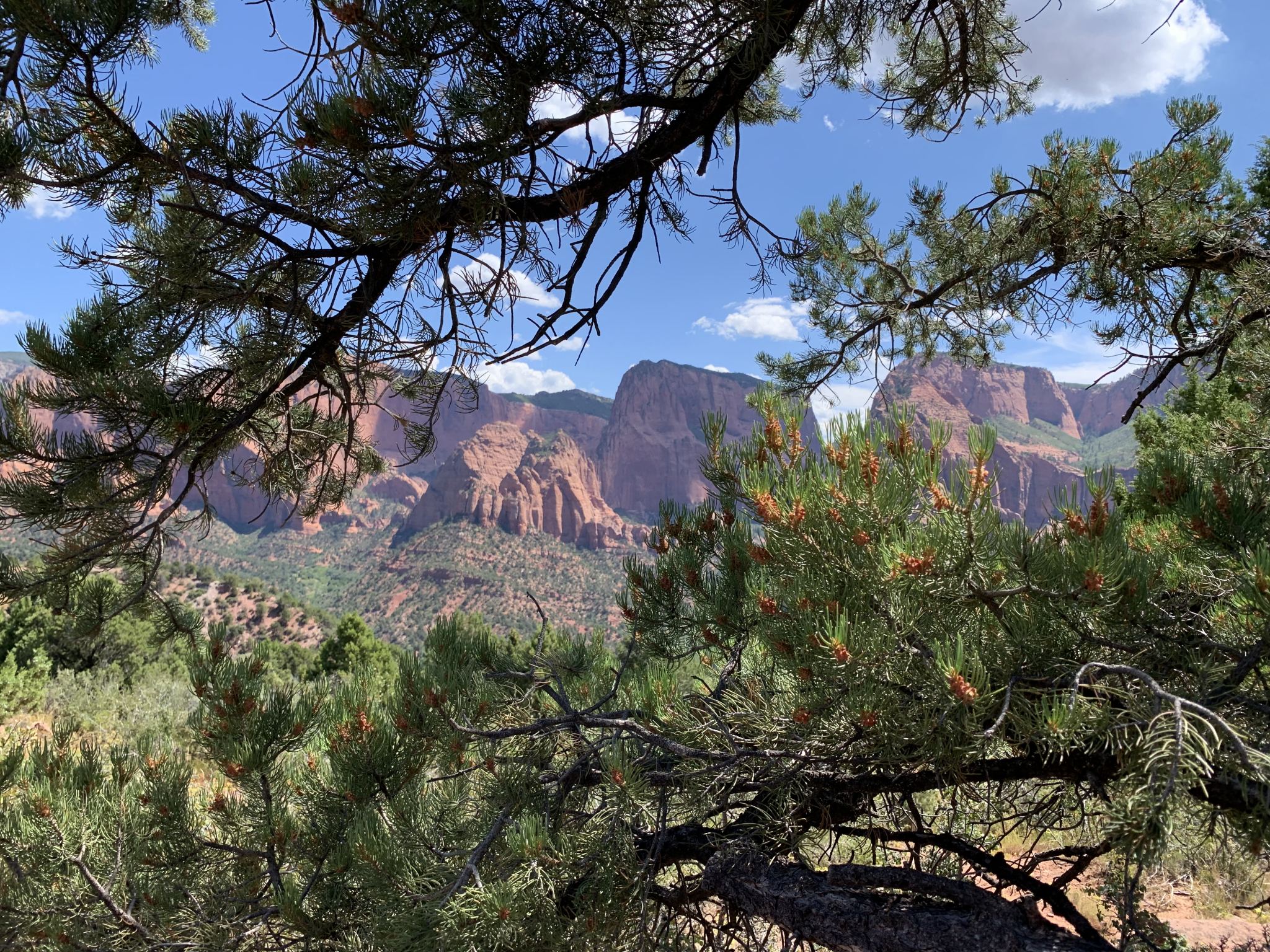 A rookie national park mistake I made a couple of times on this trip, not realizing how big US national parks can be (hint: bigger than Regent’s Park) – meant that I hadn’t realized Kolob canyon is essentially a totally separate spot from the rest of Zion, but (this time) it transpired to be a happy accident – as Kolob was our favourite walk of the trip. Really quiet (most people who planned ahead went straight to Zion proper) – quiet, and completely beautiful. 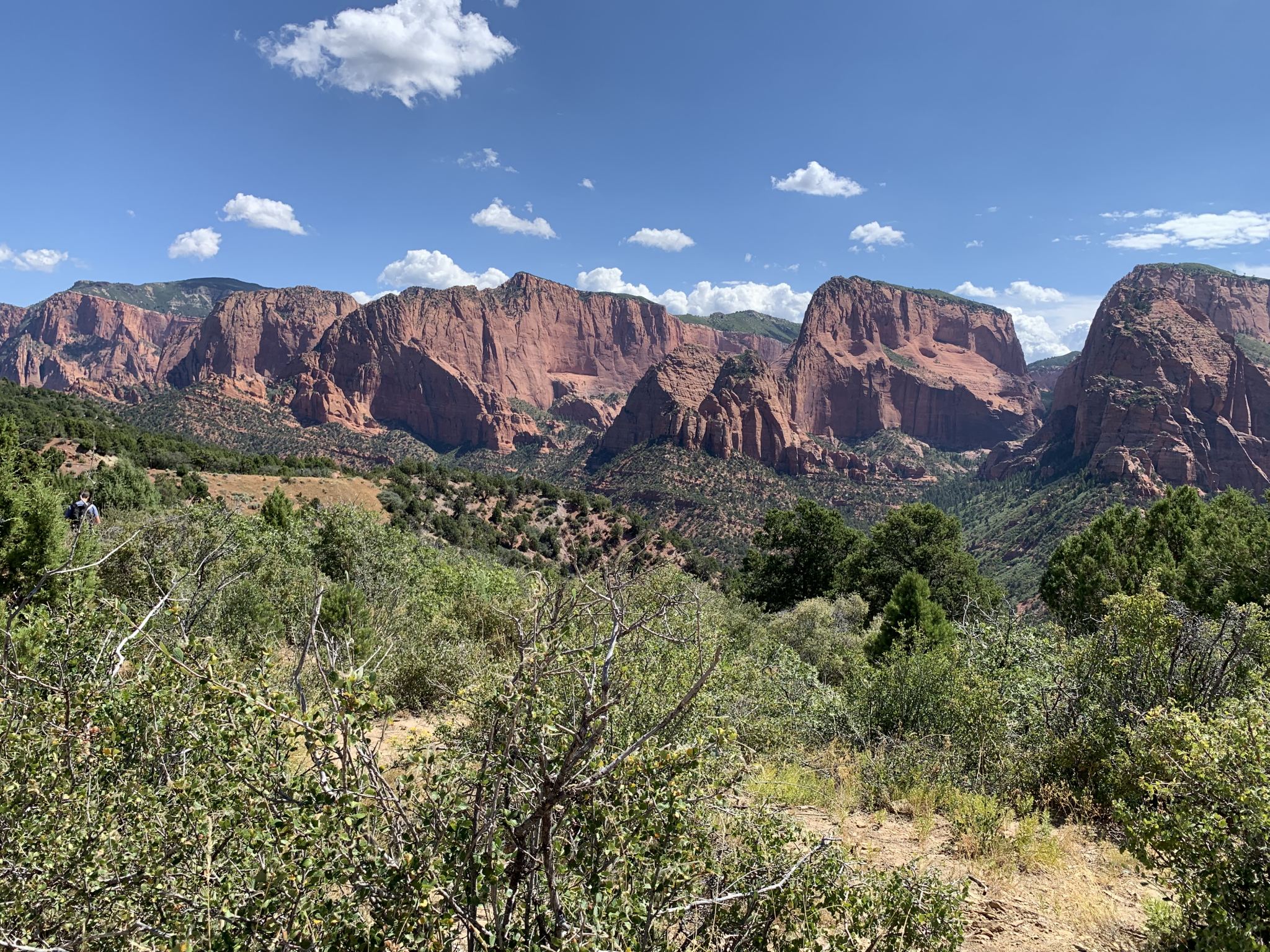 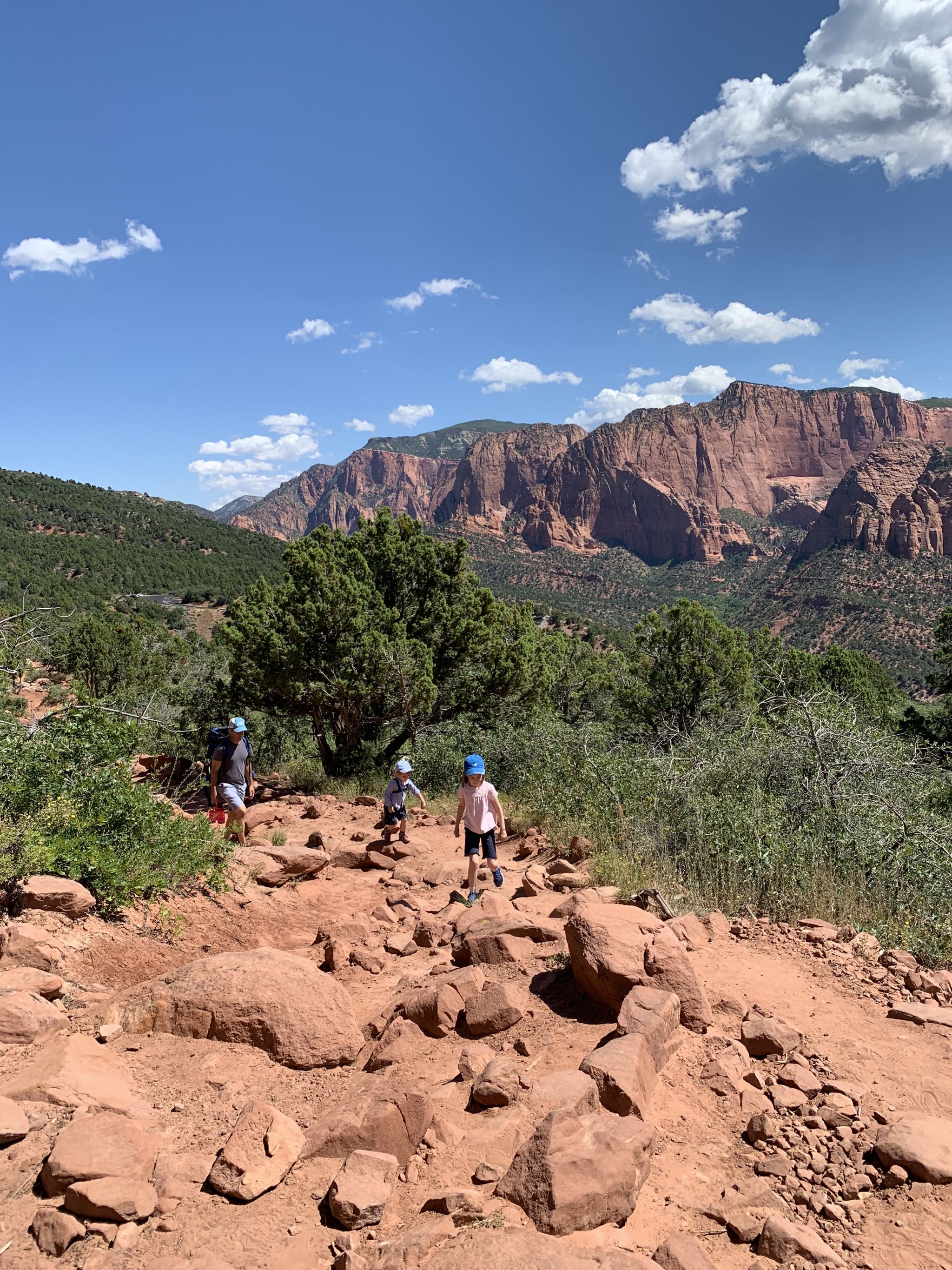 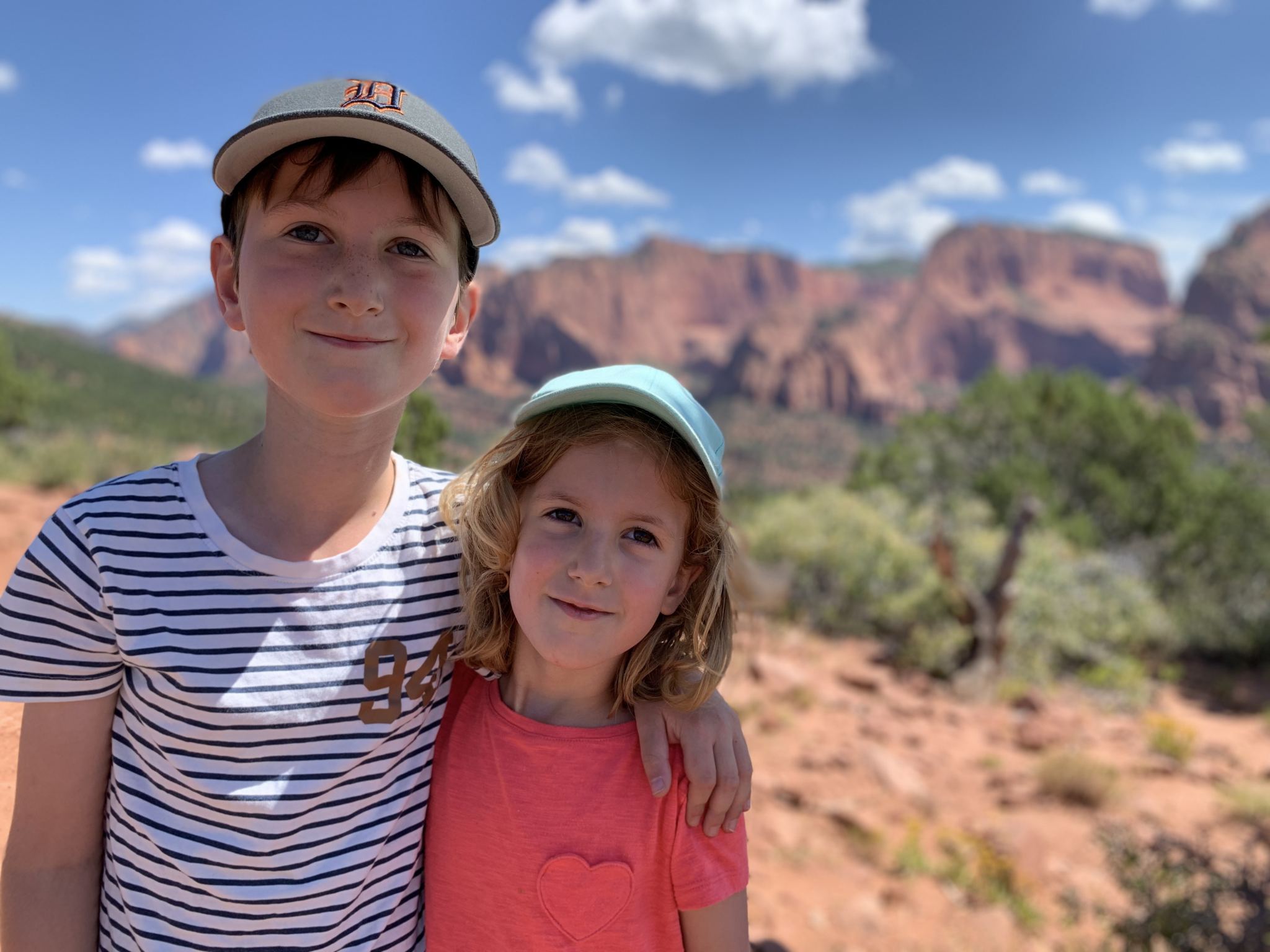 A really good walk for families – a couple of miles, some good steep bits that were challenging for children to feel proud of their accomplishment – but no lethal drops. Huge success. 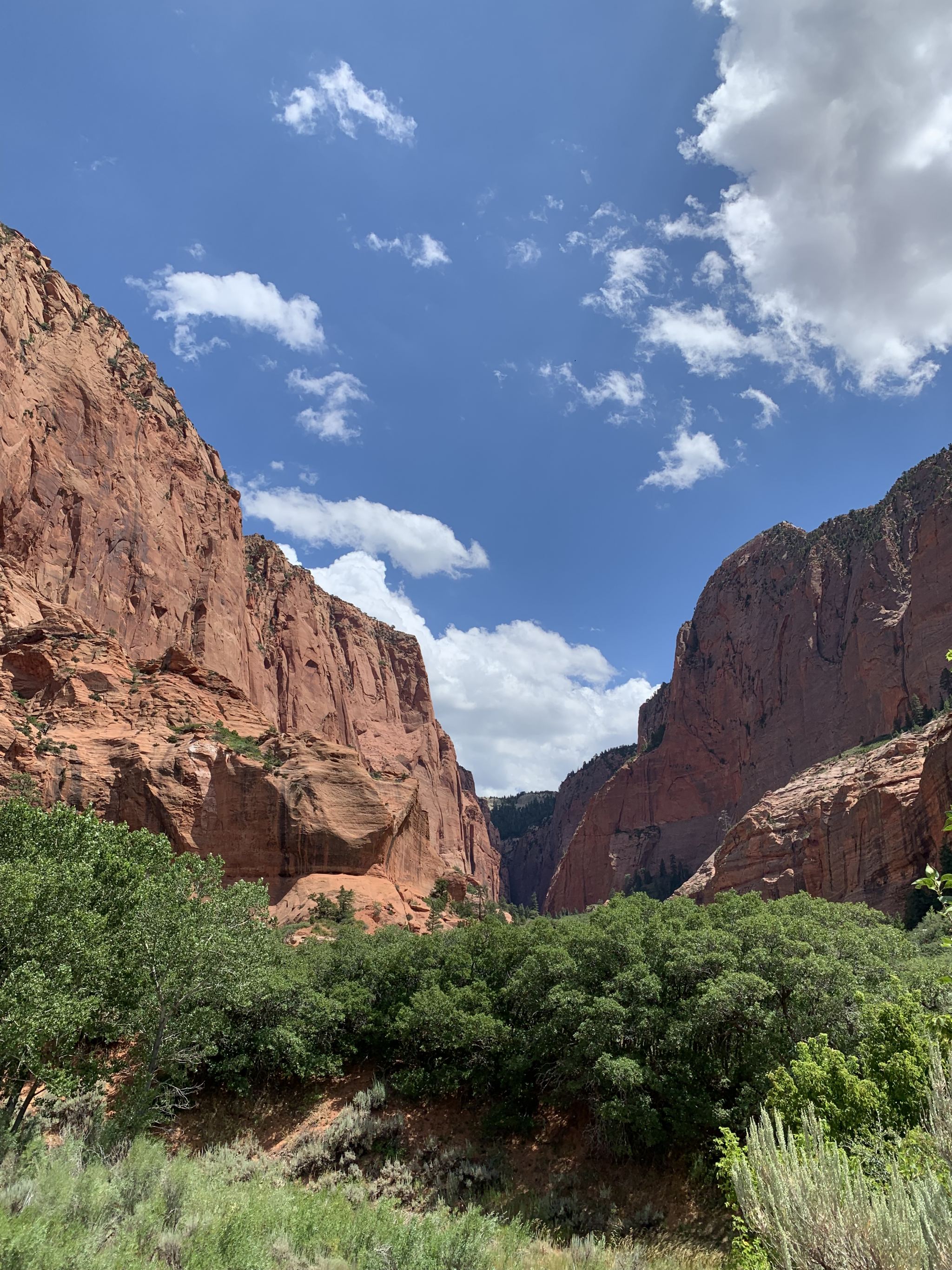 But it was a big trip! There’s more! A day spent in Zion proper; the Mt Carmel Scenic drive; the Grand Canyon; Vegas; Yosemite, and Lassen volcanic park. So I’m going to break it into two posts to save you from a barrage of holiday snaps (and also Hugo is losing patience with me typing away while he tries to go to sleep next to me). But how was YOUR summer? Did you survive?