I discovered this weekend, in a particularly long night of teething and wakefulness, that if you google ‘smug and lazy’, you find yourself at the mum and the mom.

Despite some misplaced pride in this dubious accolade, I’m also a little bewildered, given that about 95% of the internet is either about being smug and lazy, or at the very least, written by people who are smug, or lazy, or both. And as we all know, smugness and laziness are both virtues to be extolled in the cooking and craft arena.

Anyway, while we’re talking about being smug and lazy, what could be more smug (smugger?) than a chocolate cake with some nutritional merit? This is a recipe I made again the other week and it worked out pretty nicely.

Originally a recipe from Rebar, but one I have changed a bit over the years mostly based on – wait for it – laziness, and lack of preparation on the ingredients front (the original requires buttermilk and various other spices).

I made these into cupcakes, and they made about 24, which kept us busy for a while – and I didn’t ice them, as they were delicious  on their own. I have, however, made this into a loaf cake with success before, and a round sandwich style cake too.

The Rebar recipe book also suggests you can freeze any extra grated zucchini/courgette, which I suppose would be both smug AND lazy, although they don’t mention that part.

2 cups grated courgette (or, one generous courgette / 2 small courgettes. This is a fairly forgiving measure)

Spoon into tins; bake for 15-20 minutes, or until a sharp knife comes out clean. This time I baked for 20 minutes and felt they would have been better with a minute or two less. 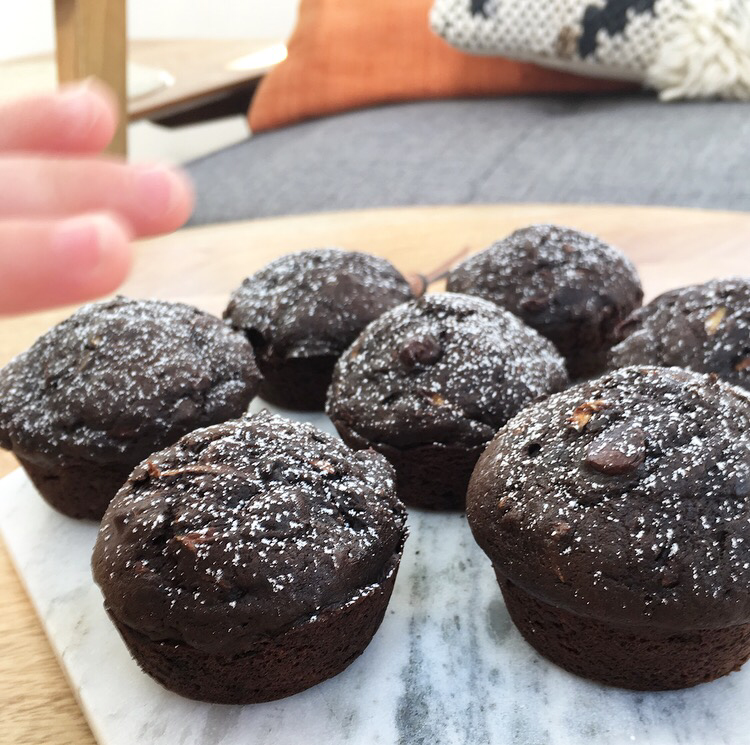 You get the idea. Every photo has a small hand quietly making its way to the table. Food photography at its finest.

Rebar use a white chocolate – cream cheese but I never do this, primarily because the children aren’t big fans of a cream cheese icing but also because it wasn’t LAZY enough for me.

I have in the past just drizzled a glace icing over the top in a sort of zig zag pattern. And this time I sprinkled some icing sugar on some of them which also looked pretty nice. But they are a rich enough cupcake and really, the icing seems kind of unnecessary for the every day cupcake.

Maybe if these were more of a special occasion cupcake I’d reconsider. But then I think for a special occasion, maybe I’d be forgoing the zucchini and sticking to something a little more straightforwardly sweet, like the definitive chocolate brownies.